Announcing the Neilalien Message Board!

There's already at least two dead message boards about Doctor Strange on the internet. Why not add another? Usenet newsgroups and various comic book message boards got you down? Would anyone use a Neilalien Message Board? Would Neilalien even use it? Let's find out! Life is experimentation.

The Story. So Wong is the master and Doc the student. That's cool. I should have expected such a switch from Bendis. I miss Wong. The old normal Wong. We got a brief glimpse in Flight of Bones. But recently it's been mostly Bitter Wong, from the end of Sorcerer Supreme, and from Universe X. The Wong-Xandu exchange felt like a screeching halt.

The Art. I love the clean simplicity of a Ditko, Pacheco, Immonen or Quitely. But sometimes I like funky and chunky. I want to support new perspectives, new artists. I want to make up for griping about Larsen. I was all McKeever in #12. But sadly, McKeever's style got old pretty quick. Too messy. At least it was the same artist for both issues, though (thinking of the artist switch in Flight of Bones). One cool item: the large blue eye appearing behind Doc when he appeared ready for battle.

The Characterization. The young Doc and Spidey, and the side comments, didn't really work for me, but I'm not really in the Ultimates demographic. Clea as a shut-down widow was a big disappointment. I miss Clea. In normal continuity, she grew up before our eyes, and only increased in both magical and character strength. Seeing her knocked up and angry and living in Queens wasn't exactly what I wanted to see.

Doc's Portrayal and Powers. The fight between Doc and Xandu is a boring lightshow, and then Doc loses. I realize it's Spidey's book and he's going to get the KO, which is fine. But please. Doc's teleport of Spidey was competent but ho-hum- just another teleport this month! Although Doc going in to get Spidey back was neat.

Overall. Most old-school Doctor Strange fans will find this kiddie book to be another disappointing reboot.

Review of The Order #1 (Spoilers)

The Story. The story was a satisfying first chapter. I feared that #1 would either be too much table-setting, or they would take over the Earth too quickly and easily. Covering the two initial incidents at Murtakesh and with the Atlantic Fleet worked for me. Meanwhile, the Little Three had one of their better moments. Any more time fighting normal-powered people and militaries would be a waste of limited-series space.

The Art. The art was solid. No complaints. The women looked like women. I much prefer the simplicity of a Ditko, Quitely or Pacheco, though. At least we got a Pacheco cover. For example, the simple Surfer on the cover looks a lot better than the full-of-busy-lines Surfer inside. Non-capital letters in comic book speech and thought balloons is just all wrong.

The Characterization. "Aloof, arrogant and powerful" was done well. The Little Three being called "the kids" by the Hulk was sweet. Valkyrie and Nighthawk finally make enjoyable, feisty appearances in this new Defenders series.

Doc's Portrayal and Powers. The teleports of the fighter plane and the Little Three were competent but ho-hum. Why not show the Crimson Bands crushing a ship in the background? Why not show the Vipers of Valtorr attacking soldiers? Where is the imagination? I would have liked to see the dramatic "temptest" go somewhere- what was the result? Rain?

Initial Reactions To Our Three-Book Day

The Order #1: A satisfying beginning. Ultimate Team-Up #13: Disappointing. My reviews are on their way.

Essential Dr. Strange at last! It rocks! Now Doc fans have a bible to enjoy, an efficient tool to gain new converts, and a convenient product for the curious. Excelsior!

In 01996, transmissions of the Doctor Strange, Sorcerer Supreme comic book stopped reaching Neilalien's home planet. Distraught, Neilalien hopped into his spacecraft and headed to Earth. Neilalien landed exactly two years ago today, and started this website and weblog. Ever since, he's been demanding, "More Doctor Strange! And make it good!"

The world's longest palindrome is 12,293 words. It's significantly longer than "Neilalien"- but it also makes a lot less sense.

How many readers does Neilalien lose due to aibohphobia? [via diveintomark]

A different Dr. Strange from the 1940's [Thrilling Comics cover found by Anti-Grimm at the Defenders Message Board]

'Impulse' Stopped Cold, Title Cancelled [Comic Wire]
"Sadly, though, I think the real obstacle we faced was the constant cross-overs and events thrust on us by DC Editorial. Trying to maintain some sort of storyline, sub-plot, character development, etc. when we are forced to participate in yet another event every third month (four in 2001!!!), is a truly insurmountable task. Painted into corners like that, it has forced me to leave loose ends in this series that I fear I cannot resolve in the two issues I have left to me." Question: Name four major factors which killed the Doctor Strange Sorcerer Supreme title? Answer: Infinity Gauntlet, Infinity War, Infinity Crusade and Siege of Darkness crossover stories taking up 17 issues between #30 - 61.

Neilalien thought the events in last week's Authority were pretty clear. If they were unclear to some, then the tone-down is that much more unfortunate. [This week's All The Rage]

Neilalien had a great weekend. Thanks for asking. Three days until Doctor Strange's Three Book Bonanza!

A Defenders fan claims to see The Order #1 and reacts: "All I will say is that Dr. Strange is going to get a lot of respect after this series." [Defenders Message Board]
Neilalien reacts: *Drool.*

Transformers and Battle of the Planets DVD news [ICv2]

Essential Dr. Strange TPB now listed for 27 February [Diamond Shipping List]
Neilalien has gotten a relatively large amount of emails re: the Doc Essential TPB over the last couple months. The exclusive cabal of Doc fanatics is clearly most displeased! Thanks for all the info. Neilalien has almost gotten into the habit of checking the Diamond Shipping Lists every Monday night because of this travesty. The Order #1 and Ultimate Team-Up #13 are also listed for 27 February. It's been a long time since Neilalien's last three-comic week!

Anyone hear anything about the Separate Reality TPB?

Neilalien ran a stats uber-report for the past year. The result:

Top 15 Referrers to Neilalien Over The Past Year, in order:

Take away Blogger and search engines, and the top referral site is Down With Organic Webshooters, which protests the wrist-spinneret-mutation-thing Peter Parker has in Sam Raimi's upcoming Spider-Man movie (as opposed to the mechanical webshooters he builds in the comic book origin). A bunch of stubborn old fans, just like Neilalien. I like that. Unfortunately, the petition only got about 5,000 signatures and the movie was not changed to mechanical shooters. I'm surprised I got so many hits from there. I guess they sent many more visitors to me with their "Supporting Sites" link than I ever sent to them for the petition. Sorry. (I see that they no longer have the link list.)

Neilalien is resting on past laurels. The Chicken is almost two years old. Time for Neilalien to start a new meme and take over the world! Yeah right. Wouldn't want to do that, anyway. Neilalien pays for this site by the transferred megabyte! :)

Thanks for the continued links and the readership, whether or not you are in my exclusive cult of Doc fanatics. 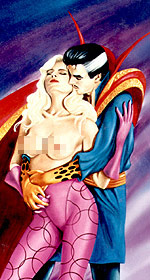 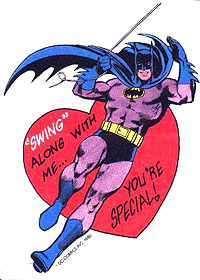 The upcoming Avengers/Defenders War TPB will be smaller [Newsarama]

The old Dr. Strange television movie gets a very unfunny MST3K treatment [MST3K Home Game]
Maybe it's a little funnier while the movie's playing. But I doubt it.

"Untitled Dr. Strange Story"- Status: Unlikely [Sequential Ellison]
Found this nice recap of old news: the defunct Ellison/Romita Jr. Doc project. It was the announcement of this project which launched the Neilalien website in its current form.

Tea With Dr. Strange [Dreamgrinder Unofficial Web Site]
I don't know who this band was, and I've never heard the song- but here are the lyrics.

This site is just waiting to review the Dr. Strange movie trailer [Z Review]
And so is Neilalien!

There are many more things more important than a comic book character. I have my health, my girlfriend, my cat, my family and friends, a warm home full of snacks. I am very grateful. Around the world, people are homeless and terrrorized and dying of starvation, and have been for centuries. Comic books are not very big in the grand scheme of things- simply an enjoyed entertainment diversion from the grand scheme of things. We must keep perspective.

When Neilalien walks into his comic book shop tomorrow and discovers that Essential Doctor Strange has once again not shipped this week, he will keep this perspective. Or Neilalien is going to break his foot up off yo ass with his Kung Fu Funkmaster 5000.

Dreamwave: More Than Meets The Eye [Newsarama]
Great Transformers G1 info and awesome images. But the point of the article is that Dreamwave has other projects going on than Transformers? Note to Dreamwave: The Transformers license is all you got. Run with it.

Fanboys, Haters, Trolls & People Who Want to Talk About Comics [Comics: Year One column at SpinnerRack]

Which Star-Crossed Marvel Lover Are You? [via LinkMachineGo]
Neilalien got Spider-Man, "Marvel's sweetest superhero and married to Mary Jane." Uh-huh. Although I have been known to swing around town with my sidekick Charisse.

What's Your Comic Book Ideology? [via LinkMachineGo]
Neilalien got Stan Lee! Rock on! Neilalien voted for comics, art, Marvel, superheroes, youth, contained stories, niches and the Internet- and against in-your-face-ness and mysogyny.

This directory of record covers drawn by comic book artists, found via BitStream, does not include Doctor Strange's appearance on a Pink Floyd cover (and probably never will- the directory hasn't been updated in over a year).

Preview of Marvel's The Order #3 [Slush Factory; Newsarama]
The Avengers vs. The Defenders drawn by Carlos Pacheco. Neilalien is really anticipating this series!

Black Panther writer Priest talks about 'blackness', 'comic book karate'; inkers not going the way of the dinosaur any time soon [All The Rage]

Similar qualifiers to what Neilalien set up for Ultimate Team-Up #12 apply here. Not interested in radical reinterpretations of the character. The plan was to avoid Mangaverse altogether. Manga is cool but not into it. And that Harry Potter look- ick.

Finally got a chance to check out Marvel Mangaverse: Eternal Twilight #1 yesterday. It was great! No one told Neilalien that Doctor Strange and Dormammu have key roles. Even Baron Mordo makes an appearance. The story was fun, and contained in one issue. The art was fun. The characters were reimagined in fun ways. Not bad at all!

Doctor Strange Fans around the world STILL demand to know: Where is the Essential Doc TPB?!


Some tidbits from the annual Marvel Enterprises shareholders meeting [current Splash]
Sparsely attended. Marvel got its anti-takeover poison pill. New debt structure: the company's in hock to either HSBC Bank or Isaac Perlmutter.

Disclosure: Neilalien does not now own, and has never owned, Marvel stock (nor AOL/Time Warner/DC, for that matter). Nothing on the Neilalien site should be construed as talking any stock up or down, or as investment advice of any kind. On a totally unrelated matter: Please buy Nokia cellphones. Have a nice day. ;)

To The Latest Bloggings